At 5,545 metres (18,192 ft) North Base Camp is an unforgettable experience. Your journey, the history of Everest and the spiritual aura of the mountain will all impress upon you. Strewn with prayer flags and with dramatic views of the surrounding peaks Everest Base Camp is an undeniably awe-inspiring location. Following rules introduced in 2004 you can't actually approach the Mount Everest Base Camp by bike, and the final 1000m is covered on foot. This will add to the experience as you are fully able to concentrate on taking in the magnificence of your surroundings

The Rongbuk Monastery is the highest religious building ever to be constructed and occupied. At the foot of the Rongbuk glacier at an altitude of 5000m and just 200 metres beneath the North side Everest base camp, it is only accessible via a dirt road. With panoramic views of the Shishapangma, Mount Everest, Cho Oyu, and Gyachung Kang peaks it has arguably one the finest viewpoints on the world.

The Monastery itself was founded in 1902 by a Nyingmapa Lama in amongst the meditation huts of monks and hermits that had been in use for over 400 years. Hermitage meditation caves still dot the cliff walls all around the complex and along the valley. At one time there were about 500 monks and nuns living here; but locals say only about 20 nuns and 10 monks remain today.

Kathmandu When you arrive in Nepal, you will have a day to collect your bike if you are hiring one for the trip, meet the group, and take in the atmosphere of Nepal's primary city.

The capital, Kathmandu, is a key destination for trekkers and independent travellers, with an established tourist district, Thamel. This is a great starting point from which to explore the city, with an array of souvenirs for sale on colourful stalls in narrow cobbled streets. If you search a little further you will see the real Nepal; a place of contrasts, marigold strewn temples, winding back streets where traders sell their wares and artisan workshops of a bygone era.

Head from Thamel towards the world heritage site, Durbar Square; you will pass markets, courtyards and stupa decked with colourful prayer flags. Durbar Square comprises 3 areas featuring traditional Nepali architecture. A key attraction in the square is the Maju Deval. A Shiva temple that dates from 1690. Built by the mother of Bhaktapur's King Bhupatindra Malla. The temple is famed for its Shiva lingam (phallic symbol) inside. The roof is decorated with ornate erotic carvings on the struts and from here you will have a wonderful view of the square and across the roofs of the city. The nine-stage ochre platform of the Maju Deval is a popular meeting place where you can watch the lively coming and goings of the city; flower sellers and fruit and vegetable hawkers, taxis and rickshaws, and other traders offering their wares to visitors. To the east side of the Maju Deval is a smaller temple to Kam Dev, a 'companion' of Shiva.

The Kumari Bahal on the east side of Basantpur Square is the home of the Royal Kumari; living goddess of Nepal. Built in 1757, it is a red brick building, several stories high with ornately carved windows. Stone Lions guard the courtyard. The Kumari is a young girl selected to be goddess until she reaches puberty when it is believed that she resumes life as a mortal. Although it is believed to be bad luck to marry an ex-Kumari. Tradition says that the goddess answers the question you are thinking by the look of her face. When the Kumari is present it is forbidden to take pictures.

Make sure you visit the Sagarmatha Bazaar on Mandala St. This is the only pedestrianised street in Kathmandu. The other face of this bustling city is the emerging modern development of concrete constructions and heavy pollution from traffic.

Other key attractions in Kathmandu include:

Swayambhu A large stupa, of cultural significance, and one of the most highly revered Buddhist sites in Nepal, with great views over the city. It's a 20-30 minute walk from Thamel, or take a taxi or rickshaw. Another sacred site for Tibetan Buddhism, is the Baudha Stupa in Baudha.

Narayanhiti Palace Museum. In 2009 the the Royal Palace became part museum and part foreign ministry. The grand halls of the main building are open to visitors. At sunset as you approach or leave the palace you will be aware of giant fruit bats hanging from the trees and huge bamboo around the building. .

In the Tibetan language, Lhasa means 'the Holy Land' or 'the Buddha Land'. The city is said to have a unique allure and has been appointed as one of the 24 historical and cultural cities of China. It is unique not only for its remote location but also its cultural and spiritual history that has helped to create the romantic and mysterious Tibetan religion. Lhasa is the administrative capital of Tibet and the second most populated city on the Tibetan Plateau. At an altitude of 3,490 metres (11,450 ft), it is also one of the highest cities in the world. There are many Tibetan Buddhist sites such as the Jokhang, Potala and Norbulingka palaces.

The imposing structure of the Potala Palace towers above Lhasa, covering an area 400 metres east-west and 350 metres north-south. The construction of the Potrang Karpo, or White Palace, as it stands today, commenced in 1645 during the reign of the fifth Dalai Lama and was completed in 1648. The Potrang Marpo, or Red Palace, was added between 1690 and 1694; its construction involved more than 7000 workers and 1500 artists and craftsman. In 1922 the 13th Dalai Lama renovated many chapels and assembly halls in the White Palace and added two stories to the Red Palace. The Potala was home to the Dalai Lama and his large staff. It was also the seat of Tibetan government, where all ceremonies of state were held; and served as a school for religious instruction of monks and administrators. It was an important destination for pilgrims because of the tombs of past Dalai Lamas. In the White Palace there are two chapels, the Phakpa Lhakhang and the Chogyal Drubphuk; built in the seventh century, these chapels are the oldest and most sacred sites within the complex. The Palace remained almost unscathed during the Tibetan uprising against the invading Chinese in 1959. Where most other Tibetan religious structures were sacked by the Red Guards during the 1960s and 1970s, the Potala was spared, all the chapels and their artefacts are very well preserved. It is said that this was through the personal intervention of Chou En Lai.

Located on Barkhor Square, the Jokhang Temple is part of the UNESCO World heritage site "Historic Ensemble of the Potala Palace," and a spiritual centre of Lhasa, widely regarded as the most sacred building in Tibet. It was built in the 7th C AD, in honour of the Nepalese princess Bhrikuti who married the ruling king Songsten Gampo. Songsten Gampo is credited with both the founding of Lhasa and the effective introduction of Buddhism into Tibet. Over the centuries the temple has undergone a number of changes. Notably during the 17th C reign of the fifth Dalai Lama. The majority of the murals within the temple date from the 18th and 19th C few of the statues date back earlier than the 1980's. The temple has endured attack and sacking a number of times.

Sera means wild rose in the Tibetan language. When the monastery was under construction the hill behind it was covered with wild roses in bloom, inspiring its name. Conceived on a grand scale, the monastery is an outstanding and imposing building. The main buildings are the Coqen Hall, Zhacang (college) and the Kamcun (dormitory). The Sera monastery is one of the most significant sights of Lhasa; as we progress around the grounds you will see scriptures written in gold powder, fine statues, scent cloth and extraordinary murals. Lively debates about Buddhism are held here in a style that is unique to this monastery. During the 1959 Cultural Revolution the monastery suffered significant damage and a number of monks were killed. It is now a respected seat of learning, training hundreds of scholars, many of whom have risen to a high profile in the Buddhist nations.

www.braillewithoutborders.org is an international organisation for the blind in developing countries. It was founded in Lhasa in 1998 by Sabriye Tenberken (who is blind herself) and her partner, Paul Kronenberg. BWB's mission is to give hope and practical skills to the visually impaired and in particular to teach Braille in developing countries. If no Braille script exists for a particular language in a developing country BWB must first develop it. BWB has altered traditional perceptions of blindness in Tibet, were for centuries the condition had been regarded as a curse, the project has provided education and training to enable the visually impaired in Tibet to enter regular schools and professions.

Shigatse or Xigatse, meaning 'the fertile land' is the second largest in Tibet. It sits in the plain at the confluence of the Yarlong Tsangpo and Nyangchu Rivers. With around thirteen ethnic groups including Tibetan, Hui and Man, Shigatse is a typical living area for minority nationalities. The city's population is 98,700 about 97% of which are Tibetan. Shigatse has a history going back more than 600 years and it is this ancient holy city that is the traditional seat of the Panchen Lama, one of the spiritual leaders in Tibet.

The city is also the cultural, economic and political centre of Tibet. Shigatse is home to the huge Tahsilhunpo Monastery, founded in 1447 by Gendun Drup, the First Dalai Lama. There is also an imposing castle, Samdrubtse Dzong or "Shigatse Dzong" thought to have been built in the 15th century. It could be described as a smaller version of the Potala Palace. It used to be the seat of the kings of Ü-Tsang and the capital of the province of Ü-Tsang or Tsang. The castle was totally dismantled, rock by rock, by hundreds of Tibetans on the orders of the Chinese in 1961. Between 2005 and 2007, the building was reconstructed, financed by donations from Shanghai.

Tahsilhunpo Monastery Located on a hill in the centre of the city, in Tibetan the full name of the monastery means: "all fortune and happiness gathered here" or "heap of glory". The temple was founded 1447 by Gendun Drup, the First Dalai Lama. It is a historic and culturally important monastery near to Shigatse, the second-largest city in Tibet and one of the four great monasteries of the Gelugpa School of Tibetan Buddhism. The monastery is the seat of to the Panchen Lama, the second most important spiritual leader of Tibet.

During the lifetime of the 4th Panchen Lama, Lobsang Choekyi Gyaltsen, there were more than 3,000 monks in the Monastery and by 1959 there were 5,000, with another 2,000 monks affiliated to the monastery living outside Tibet. Today the Tashi Lhunpo is a not for profit charitable organization which imparts various aspects of the Buddhist religion while maintaining a school of modern education.

There are several key places on our Lhasa to Kathmandu cycling holiday. Please choose from the following list for more information on each key place. 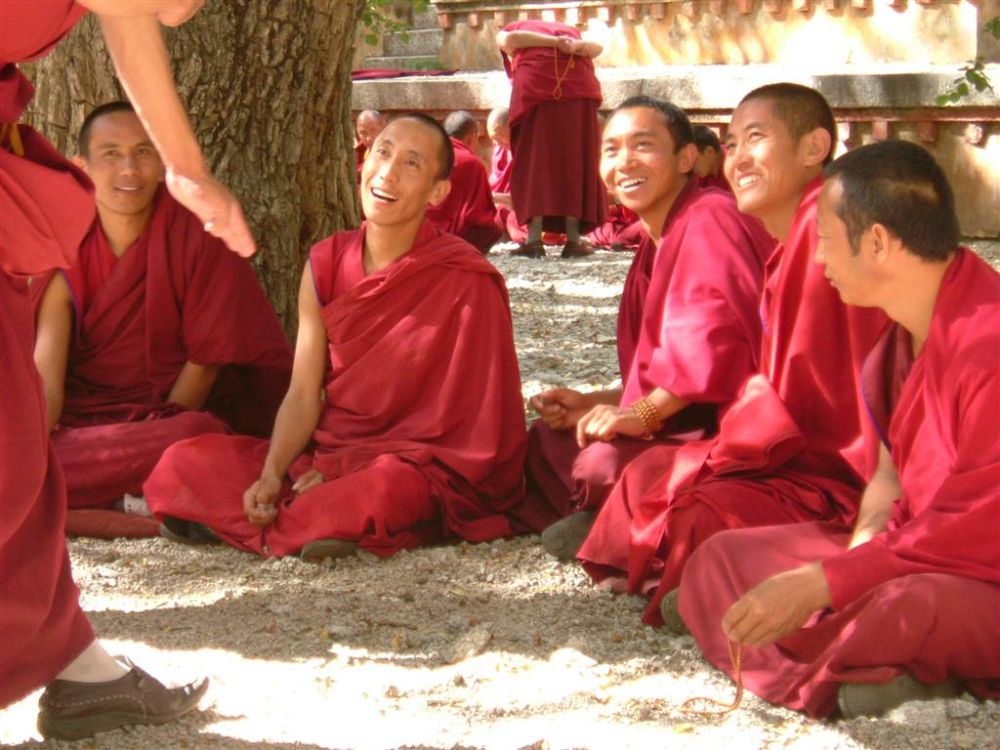 "Ox and his crew could really have not done any more for us, great food and plenty of it (We are like kings!) whilst camping in amazing locations. They comfortably..."